The Monetary Policy Committee (MPC) of the Reserve Bank of South Africa (SARB) raised South Africa’s official bank rate (repo rate) by 25 basis points to 4.25% during its March 24 political meeting. This is the third consecutive increase in the repo rate, after falling to the lowest rate in half a century at the start of 2020, induced by the Covid pandemic and fears of a deep recession. According to Sarb’s projections, the country’s consumer price index (CPI) will rise to 5.8% this year and then decline to 4.6% in 2023.

The prime overdraft rate has now fallen to just below 8%. Although the concomitant increase in monthly repayments on mortgages and other credit instruments should still be manageable for high income groups, households in the middle and low income groups have been hit hard by the premature move from the MPC to a restrictive monetary policy.

There is little doubt about the short to medium term nature of the current upward trend in price levels, as it has been primarily caused by a combination of supply chain disruptions stemming from the uneven global pattern of lockdown restrictions as well as by rising energy prices in the aftermath of the war in Ukraine.

The impending easing of constraints on manufacturing industries and international shipping are widely expected to lead to a continued global economic recovery and also facilitate an upward trend in goods trade activity. Combined with the likelihood of a rapid end to Russian hostilities in Ukraine and the approach of summer in the northern hemisphere, the price of oil could begin to drop like a stone by mid-2022, thus reversing the current upward trend in inflation.

The Reserve Bank continues to avoid issues that signal the need for more accommodative monetary policy, including the persistently low level of capacity utilization in manufacturing sectors, most of which have yet to fully recover from the effects of the pandemic.

South African manufacturers cite insufficient demand as the main reason many factories are not operating at full capacity remotely, which also limits the capital formation pipeline in new production capacity.

The most glaring evidence of an unbalanced political outlook by the MPC is the ignorance of the South African currency’s supercharged year-to-date performance. Apart from the Brazilian real, no other major currency has been able to match the performance of the rand over the past three months. Between January 3 and March 24, the rand appreciated by 7.5% to 13.6% against the currencies of the world’s six largest economies.

In conclusion, South Africa currently has nothing to fear from inflationary pressures induced by the weak currency. This point is underscored by the Reserve Bank’s acknowledgment of balance of payments stability, as it expects the trade balance to remain in significant surplus territory.

Real prime rate out of whack

Since the retirement of former Reserve Bank Governor Gill Marcus, the MPC’s monetary policy approach has stubbornly pursued low inflation, with an apparent disregard for the need to spur growth and job creation. jobs. Even during the slightly more lenient approach to the worst of the pandemic, South Africa’s commercial bank prime rate was higher, in real terms, than most of its major trading partners. 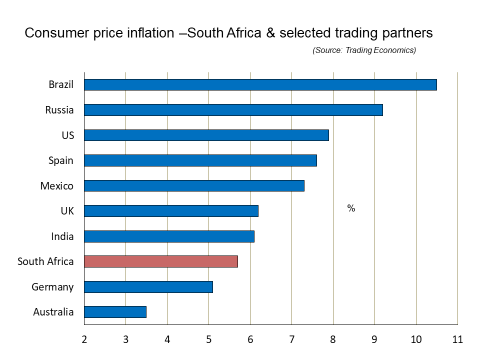 Another quantifiable argument against the notion of higher interest rates is the continued weakness in credit provision to the private sector, which stands at a level just above 4.1 trillion rand, or 2.3 % less than two years ago. The South African economy has never been able to grow at rates commensurate with significant job creation unless the extension of credit to the private sector is expanded.

For the first time in decades, South Africa is enjoying a significantly higher degree of price stability than many of its trading partners and emerging market peers. When contrasted with a comparison of unemployment rates nationwide, it becomes clear that economic growth should be given a higher priority in South Africa than trying to bring inflation down to low levels. levels that are not achievable in the current inflationary cost-push environment.

President Cyril Ramaphosa and Finance Minister Enoch Godongwana must be terribly frustrated by the MPC’s decision to raise the cost of capital at a time when new investment in generating capacity is desperately needed. DM/BM