Monetary policies are traditionally considered to have no direct effect on aggregate supply. This article argues that this view of supply neutrality vis-à-vis monetary policies may change if we pay more attention to the role of money supply on firms’ working capital needs.

Monetary policies are traditionally seen as demand management policies in all sorts of macroeconomic models. For example, when inflation is high in an economy, a natural reaction for the central bank is to reduce the money supply through one of the many instruments available in its repertoire. Such a reduction in the money supply will ultimately reduce prices by reducing the demand for consumer goods or capital goods or both. The effectiveness of these monetary policies depends of course on the extent to which prices fluctuate and, therefore, wages react to the fall in the money supply. Apart from this demand-induced supply variation, however, there is no direct role of monetary policies on the aggregate supply (AS) of the economy.

This article argues that this view of supply neutrality vis-à-vis monetary policies may change if we pay more attention to the role of money supply on firms’ working capital needs. A contraction in the money supply and the resulting rise in interest rates makes working capital financed by banks more expensive for businesses. This negatively affects their ability to finance current transactions, including salary and interest payments. The effect of such changes on supply is negative.

Such a supply-side shock from monetary policies makes their outcomes unpredictable, even on prices. In particular, the rise in prices corresponding to this fall in supply may outweigh the negative effect on prices distributed on the demand side. In such a situation, a restrictive monetary policy may be completely ineffective in controlling inflation, leading instead to the undesirable outcome of stagflation.

Our work is related to Rakshit (1989), Agénor and Montiel (2008), Marjit and Nakanishi (2021), and Marjit and Das (2021). But to our knowledge, no paper has introduced the classic wage fund approach into standard Keynesian macroeconomics for analyzing monetary policy.

In our model, the effect of higher interest on AS is driven by the contribution of the classical wage-fund hypothesis, proposed by John Stuart Mill, and widely used by classical economists such as David Ricardo, in a otherwise model IS-LM (Hicks 1937). Here is the description of a simple model and a schematic demonstration of the basic idea.

Equations (1) and (2) are taken from an undergraduate textbook describing the well-read IS-LM model with usual functions and arguments. YesD is aggregate demand (AD) and r is the interest rate. Given the money supply and other parameters, these are determined when the commodity and money markets are both in equilibrium.

Equation (3) suggests that production requires time and that at the beginning of the period, Le number of workers hired at fixed nominal wage O by borrowing from banks and financiers, and once production is completed, the principal is repaid with interest. This is the idea of ​​wage funds propagated by Mill in 1848. In the national standard
revenue recognition, we need to recognize the profit after the factors have been paid. Here, it is the profit of the financiers that counts and any other surplus is eliminated by competition. We could bring about an imperfect credit market via a spread between the borrowing rate and the lending rate. This is assumed to abstract away complications and record the bare minimum of change in the macroeconomic structure of the Keynesian model (Keynes 1936) under otherwise ideal conditions.

Equation (3) can be interpreted as giving the maximum number of workers that can be employed at OWhich one is [PYs (Le)]/[(1+r) W], i.e. the present value of gross domestic product (GDP) deflated by the nominal wage rate. At a time, P.Y.s (Le)/(1+r) can be interpreted by the value of the total stock of financing that can be used in the current period and the wages of the workers. The last equation is the production function. We have deliberately removed the role of profit or profit as it is usually recorded in national income accounting. Here, income is generated either as wage income or as interest income.

Equations (1) and (2) solve for YesD and r in terms of M, P and K. We can therefore generate the normal Keynesian AD curve with negative slope varying P. Equation (3) determines Le in terms of O, r and P. Equation (5) determines P as a function of M, K, O and r. Finally, equation (4) determines Yes given M, K, Oand r. The solution for Le, Yesand P is shown in Figures 1 and 2. The first quadrant of Figure 1 uses the fact that a small rearrangement of equation (3) leads to: 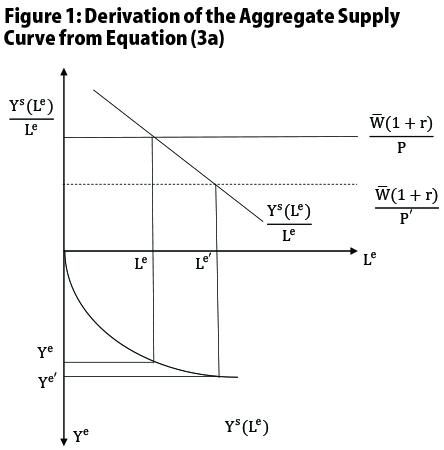 The consequence of a decrease in the money supply is illustrated in Figure 2. When the money supply decreases according to normal textbook logic, the following two things happen on the demand side: (i) the interest rate increases and (ii) the AD curve shifts to the left. However, unlike the classical version of the Keynesian model, in this model there is a feedback effect of rising interest rate on the supply side via equation (3) and the AS curve also shifts towards the left. The relative shifts of the AD and AS curves depend on the interest elasticity of the money supply (the slope of the speculative demand curve in the IS-LM model). The steeper the slope, the greater the rise in interest rates due to a reduction in the money supply and the greater the shift in the AS curve relative to a shift in the AD curve. In this case, prices will rise and a situation of stagflation will be created. The situation is illustrated in Figure 2. 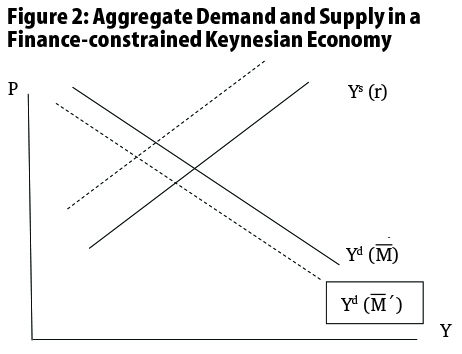 Differentiating equation (3) we have:

It is therefore clear that the magnitude of the price increase on the supply side is positively dependent on the size of the wage fund/working capital requirement (right scale of the equation [6]) companies. We can therefore conclude that:

Proposal: Restrictive monetary policies are less effective in controlling inflation in economies where companies have large working capital needs. And it can even lead to stagflation.

Note from Figure 2 that the effect of supply-induced stagflation would be more severe the steeper the AD curve. A rise in P usually increases r noticeably with a moderate effect on Yes whether investment demand is relatively insensitive to interest rates. In this case, the negative effect on supply would be felt more on the rise in the price level than on overall production. For a steeper aggregate supply curve, monetary policy would be more effective in controlling the inflationary trend. But the direct impact on the supply side of a higher interest rate drastically changes the scenario and makes everything that allows r suddenly adjust. It would also make monetary policy less effective in controlling inflation.

It should also be noted that if the original reason was a bad supply shock – when AS had to move left – a further contraction of AD would dampen GDP. But that would not aggravate the inflationary trend. This is why criticisms of demand management policy tend to focus on the additional negative impact on GDP, as the source of inflation is misjudged by policymakers. But our argument is quite different from these conventional concerns.

We emphasize that when the interest rate directly affects output and the flow of output, any restrictive monetary policy has a negative impact on the supply side, and if controlling inflation is the goal, it may not work.

Marjit, S and N Nakanishi (2021): “The Wage Fund Theory and the Gains from Trade in a Dynamic Ricardian Model”, Working Paper No. 9218, CES-Ifo.