On the west bank of the Genesee River in Rochester, about a quarter mile south of where the city sits in the midst of a multi-million dollar riverside beautification project, the building A long-abandoned vacuum oil refinery is the capital of a ghost town of graffiti and trash.

For decades, the sprawling warehouse has stood derelict where Flint Street ends at the riverfront and has been a stubborn obstacle to the revitalization of surrounding neighborhoods. A pile of car bumpers strewn around the building has recently only added to its stature as a symbol of neglect.

Developer Tom Masaschi had envisioned a mix of housing and commercial space when he bought the building and another nearby contaminated waterfront plot in 2008 through his company, DHD Ventures.

RELATED: Who Will Clean Up The Mess In PLEX?

But that vision, which has made no visible progress, became even more unlikely after a state judge in March ordered Masaschi to sell his two plots — at 5 and 15 Flint Street — as part of a a mortgage foreclosure case. Masaschi had used the properties as collateral for a loan he was unable to repay.

The order, issued by state Supreme Court Justice Scott Odorisi, means even more uncertainty for the beleaguered properties, as well as the neighborhood that has suffered in their shadow for generations. Masaschi is appealing the decision.

If the properties are sold, it would likely bring a new developer into the fold, which could mean a new vision for the properties. There seems to be some interest in the site.

Dana Miller, commissioner of the city’s neighborhood and business development department, said a local business had already approached the city to secure the two properties, which were not for sale at the time.

“We certainly don’t want them to stay in limbo,” Miller said. “We want a dedicated owner to take these properties, clean them up and then return them to some useful activity in the city, whether it’s the plan that DHD had put forward to build housing and a small commercial area and student accommodation on these. sites, or any other use someone might have.

Hall said he and some residents were concerned the city would seek a new developer without neighborhood input. The PLEX Neighborhood Association advocated for mixed-income housing that would include housing that people already living in the neighborhood could afford.
Neighborhood leaders have also pushed for the construction of a public playground as part of the development of Vacuum Oil sites.

Odorisi’s order coincides with a handful of judgments against Masaschi and his companies that reportedly total more than $20 million. Masaschi did not return a call seeking comment.

Properties at 5 and 15 Flint Street have a long history of pollution, making cleanup and redevelopment of properties complex and expensive. At one point, DHD submitted a proposed $17 million cleanup plan to the state Department of Environmental Conservation. More recently, however, he was planning a less aggressive cleaning. 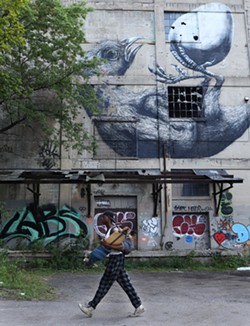 Vacuum Oil was established in 1866, the year founders Matthew Ewing and Hiram Everest patented a method of producing kerosene from crude oil by vacuum distillation. By the time the refinery complex closed in 1935, it had grown to 40 acres along the river, bordered by Violetta Street to the north and Cottage Street to the south.

The heart of the complex, however, was along Flint Street. This is where a series of spills, explosions and other events saturated the ground with oil and related chemicals. Part of the site was then used as a dump, adding to the contamination.

In the years since DHD purchased 5 and 15 Flint Street, the company and the properties have been embroiled in a handful of lawsuits, including one brought by DHD against ExxonMobil in an attempt to force the fossil fuel giant to cover cleaning costs. ExxonMobil is the legal successor to Vacuum Oil.

This lawsuit and related negotiations are still active. Even if Masaschi sells or loses control of the Flint Street properties, he and his companies can still seek damages from Exxon Mobil, said environmental attorney Alan Knauf, who represents Masaschi and the DHD companies in the lawsuit against ExxonMobil. . Any new owner could join the legal proceedings.

The sale order stems from a 2019 foreclosure proceeding filed against Masachi, DHD and other affiliates by US Income Partners, a Henrietta-based lending firm specializing in real estate development. The company had loaned Masaschi $1.6 million. Proceeds from any sale must be used to repay that debt, according to Odorisi’s order. Masaschi will be responsible for any residual obligation not fulfilled by the sales money.

The city of Rochester, which owns and cleans several other key properties that were part of the Vacuum Oil complex, would make a logical owner, if only in transition. The city could consolidate its lots with 5 and 15 Flint St., which would allow it to offer potential developers a larger site.


Massaschi had offered the city a chance to buy the properties, but officials agreed because the cleanup costs would have been too much for the public to bear, Miller said. But city officials have not ruled out buying the properties on good terms, he added.

For example, Miller explained that the city might be interested if ExxonMobil and DHD negotiated a cleanup cost-sharing plan. Such a deal would also make the properties more attractive to private developers.

“Without ExxonMobil’s involvement, these properties would most likely remain as they are for the foreseeable future, unless we could secure a state or federal grant for some sort of cleanup,” Miller said. .

“There is no money in the normal city budgeting process for these kinds of major cleanup activities.”

Jeremy Moule is the editor of CITY. he can be reached at [email protected]